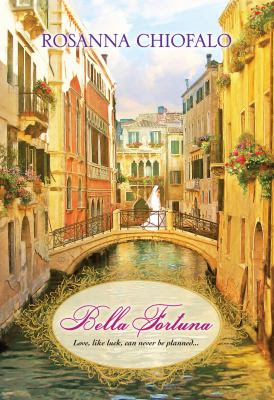 Chiofalo's debut tells the story of Valentina DeLuca, a young woman in Queens who is set to marry her childhood crush, Michael Carello. She and her mother run a faux-couture bridal shop in Astoria, but while Valentina's life is all wedding gowns and lacy veils, she has yet to walk down the aisle. With her dream wedding in Venice just a month away, her fiance suddenly breaks off the engagement. Devastated, Valentina resolves to go to Venice on her own and see the city of her dreams. There she meets Stefano, a handsome tour guide with whom she has a whirlwind romance, and whose affections force Valentina to reconsider all she knows of love, forgiveness, and family. Chiofalo, a first-generation Italian-American whose parents emigrated from Sicily in the 1960s, brings the Italian immigrant community and neighborhoods richly to life.

The Promise of Stardust
by Priscille Sibley

Matt Beaulieu was two years old the first time he held Elle McClure in his arms, seventeen when he first kissed her under a sky filled with shooting stars, and thirty-three when they wed. Now in their late thirties, the deeply devoted couple has everything--except the baby theyve always wanted. When a tragic accident leaves Elle brain-dead, Matt is devastated. Though he cannot bear losing her, he knows his wife, a thoughtful and adventurous scientist, feared only one thing--a slow death. Just before Matt agrees to remove Elle from life support, the doctors discover that she is pregnant. Now what was once a clear-cut decision becomes an impossible choice. Matt knows how much this child would have meant to Elle. While there is no certainty her body can sustain the pregnancy, he is sure Elle would want the baby to have a chance. Linney, Matts mother, believes her son is blind with denial. She loves Elle, too, and insists that Elle would never want to be kept alive by artificial means, no matter what the situation. Divided by the love they share, driven by principle, Matt and Linney fight for what each believes is right, and the result is a disagreement that escalates into a controversial legal battle, ultimately going beyond one family and one single life. Told with sensitivity and compassion, The Promise of Stardust is an emotionally resonant and thought-provoking tale that raises profound questions about life and death, faith and medicine--and illuminates, with beauty and grace, the power of love to wound . . . and to heal.


The long-awaited cookbook by Deb Perelman of Smitten Kitchen--home cook, photographer, and celebrated food blogger. Deb Perelman loves to cook. She isn't a chef or a restaurant owner--she's never even waitressed. Cooking in her tiny Manhattan kitchen was, at least at first, for special occasions--and, too often, an unnecessarily daunting venture. Deb found herself overwhelmed by the number of recipes available to her. Have you ever searched for the perfect birthday cake on Google? You'll get more than three million results. Where do you start? What if you pick a recipe that's downright bad? So Deb founded her award-winning blog, Smitten Kitchen, on the premise that cooking should be a pleasure, and that the results of your labor can--and should--be delicious . . . every time. Deb is a firm believer that there are no bad cooks, just bad recipes. She has dedicated herself to creating and finding the best of the best and adapting the recipes for the everyday cook. And now, with the same warmth, candor, and can-do spirit her blog is known for, Deb presents her first cookbook: more than 100 recipes--almost entirely new, plus a few favorites from the site--all gorgeously illustrated with hundreds of her beautiful color photographs. The Smitten Kitchen Cookbook is all about approachable, uncompromised home cooking. Here you'll find better uses for your favorite vegetables: asparagus blanketing a pizza; ratatouille dressing up a sandwich; cauliflower masquerading as pesto. These are recipes you'll bookmark and use so often they become your own, recipes you'll slip to a friend who wants to impress her new in-laws, and recipes with simple ingredients that yield amazing results in a minimum amount of time. Deb tells you her favorite summer cocktail; how to lose your fear of cooking for a crowd; and the essential items you need for your own kitchen. From salads and slaws that make perfect side dishes (or a full meal) to savory tarts and galettes; from Mushroom Bourguignon to Chocolate Hazelnut Crepe Cake, Deb knows just the thing for a Tuesday night, or your most special occasion.

The Aviator's Wife
by Melanie Benjamin

In the spirit of "Loving Frank" and "The Paris Wife," acclaimed novelist Benjamin pulls back the curtain on the marriage of one of America's most extraordinary couples: Charles Lindbergh and Anne Morrow Lindbergh.

Murder Below Montparnasse
by Cara Black


A possibly priceless long-lost Modigliani portrait, a grieving brother's blood vendetta, a Soviet secret that's been buried for 80 years--Parisian private investigator Aimee Leduc's current case is her most exciting one yet.

Detriot: An American Autopsy
by Charlie LeDuff
With the steel-eyed reportage that has become his trademark and the righteous indignation only a native son possesses, LeDuff sets out to uncover what destroyed his city. He embeds with a local fire brigade struggling to defend its city against systemic arson and bureaucratic corruption. He investigates politicians of all stripes, from the smooth-talking mayor to career police officials to ministers of the backstreets, following the paperwork to discover who benefits from Detroit's decline. He beats on the doors of union bosses and homeless squatters, powerful businessmen and struggling homeowners, and the ordinary people holding the city together by sheer determination. If Detroit is America's vanguard in good times and bad, then here is the only place to turn for guidance in our troubled era. While redemption is thin on the ground in this ghost of a city, Detroit: An American Autopsy is no hopeless parable. LeDuff shares an unbelievable story of a hard town in a rough time filled with some of the strangest and strongest people our country has to offer. Detroit is a dark comedy of the absurdity of American life in the twenty-first century, a deeply human drama of colossal greed and endurance, ignorance and courage.

A Teaspoon of Earth and Sea
by Dina Nayeri

A magical novel about a young Iranian woman lifted from grief by her powerful imagination and love of Western culture. Filled with a colorful cast of characters and presented in a bewitching voice that mingles the rhythms of Eastern storytelling with modern Western prose, this is a tale about memory and the importance of controlling one's own fate.

Mary Coin
by Marisa Silver
In 1936, photographer Dorothea Lange took a portrait that would become the most iconic image of the Great Depression. Her subject was Florence Owens Thompson, a 32-year-old Native American and mother of seven. "Mary Coin" is the novel inspired by that photograph.

Z: A Novel of Zelda Fitzgerald
by Therese Anne Fowler

When beautiful, reckless Southern belle Zelda Sayre meets F. Scott Fitzgerald at a country club dance in 1918, she is 17 years old and he is a young army lieutenant. Before long, the "ungettable" Zelda has fallen for him despite his unsuitability: Scott isn't prominent or even a Southerner, and keeps insisting that his writing will bring him both fortune and fame.

This idea lasts most of my life; it is how I coped. But not without profound consequences. For so many years I had to be a "smoldering, sexy spitfire," an "ethnic maiden." I was forced to play by Hollywood's rules, search for self-worth in often toxic relationships, and feign a "perfect" forty-six-year marriage. I may have appeared as bold and golden as all my statuettes-Oscar, Tony, Emmy, Grammy-but inside, the struggle continued.