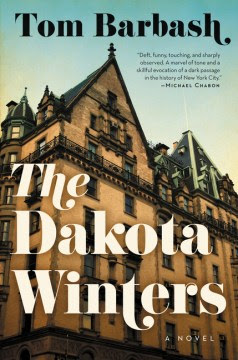 The Dakota Winters : a novel
by Tom Barbash

An evocative and wildly absorbing novel about the Winters, a family living in New York City’s famed Dakota apartment building in the year leading up to John Lennon’s assassination.  It’s the fall of 1979 in New York City when twenty-three-year-old Anton Winter, back from the Peace Corps and on the mend from a nasty bout of malaria, returns to his childhood home in the Dakota. Anton’s father, the famous late-night host Buddy Winter, is there to greet him, himself recovering from a breakdown. Before long, Anton is swept up in an effort to reignite Buddy’s stalled career, a mission that takes him from the gritty streets of New York, to the slopes of the Lake Placid Olympics, to the Hollywood Hills, to the blue waters of the Bermuda Triangle, and brings him into close quarters with the likes of Johnny Carson, Ted and Joan Kennedy, and a seagoing John Lennon.  But the more Anton finds himself enmeshed in his father’s professional and spiritual reinvention, the more he questions his own path, and fissures in the Winter family begin to threaten their close bond. By turns hilarious and poignant, The Dakota Winters is a family saga, a page-turning social novel, and a tale of a critical moment in the history of New York City and the country at large. 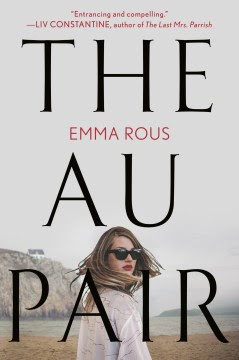 The Au Pair
by Emma Rous

"An addictive, highly commercial suspense novel featuring a grand estate, terrible secrets, and a young woman who bears witness to it all. If V.C. Andrews, Kate Morton, and Lexie Elliot had a love child, Emma Rous and THE AU PAIR would be it. Seraphine Mayes and her twin brother Danny were born in the middle of summer at their family's estate on the Norfolk coast. Within hours of their birth, their mother threw herself from the cliffs, the au pair fled, and the village thrilled with whispers of dark cloaks, changelings, and the aloof couple who drew a young nanny into their inner circle. Now an adult, and mourning the recent death of her father, Seraphine begins to go through his belongings, when she uncovers a family photograph that raises dangerous questions. It was taken on the day the twins were born, and in the photo, their mother, surrounded by her husband and her young son, is beautifully dressed, smiling serenely, and holding just one baby. Who is the child and what really happened that day? Someone knows the truth, if only Seraphine can find her." 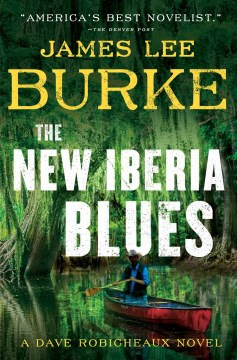 "The shocking death of a young woman leads Detective Dave Robicheaux into the dark corners of Hollywood, the mafia, and the backwoods of Louisiana in this gripping mystery from "modern master." (Publishers Weekly) Detective Dave Robicheaux's world isn't filled with too many happy stories, but Desmond Cormier's rags-to-riches tale is certainly one of them. Robicheaux first met Cormier on the streets of New Orleans, when the young, undersized boy had foolish dreams of becoming a Hollywood director. Twenty-five years later, when Robicheaux knocks on Cormier's door, it isn't to congratulate him on his Golden Globe and Academy Award nominations. Robicheaux has discovered the body of a young woman who's been crucified, wearing only a small chain on her ankle. She disappeared near Cormier's Cyrpemort Point estate, and Robicheaux, along with young deputy, Sean McClain, are looking for answers. Neither Cormier nor his enigmatic actor friend Antoine Butterworth are saying much, but Robicheaux knows better. As always, Clete Purcel and Davie's daughter, Alafair, have Robicheaux's back. Clete witnesses the escape of Texas inmate, Hugo Tillinger, who may hold the key to Robicheaux's case. As they wade further into the investigation, they end up in the cross-hairs of the mob, the deranged Chester Wimple, and the dark ghosts Robicheaux has been running from for years. Ultimately, it's up to Robicheaux to stop them all, but he'll have to summon a light he's never seen or felt to save himself, and those he loves. 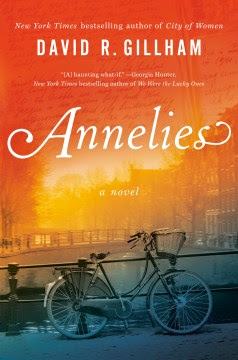 "What if Anne Frank survived the Holocaust? The year is 1945, and Anne Frank is sixteen years old. Having survived the concentration camps but lost her mother and sister along the way, she reunites with her father, Pim, in newly liberated Amsterdam. But it's not easy to fit the pieces of their life back together. Anne is adrift, haunted by the ghosts of the horrors they experienced, while Pim is fixated on returning to normalcy. Her beloved diary has been lost, and her dreams of becoming a writer seem distant and pointless now. As Anne struggles to overcome the brutality of memory and build a new life for herself, Anne grapples with heartbreak, grief, and ultimately the freedom of forgiveness"--Dust jacket. 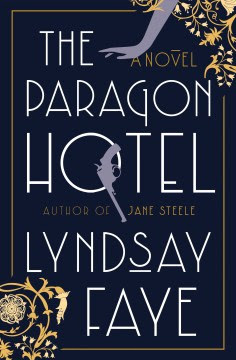 The Paragon Hotel
by Lyndsay Faye

The year is 1921, and "Nobody" Alice James is on a cross-country train, carrying a bullet wound and fleeing for her life following an illicit drug and liquor deal gone horribly wrong. Desperate to get as far away as possible from New York City and those who want her dead, she has her sights set on Oregon: a distant frontier that seems the end of the line. She befriends Max, a black Pullman porter who reminds her achingly of Harlem, who leads Alice to the Paragon Hotel upon arrival in Portland. Her unlikely sanctuary turns out to be the only all-black hotel in the city, and its lodgers seem unduly terrified of a white woman on the premises. But as she meets the churlish Dr. Pendleton, the stately Mavereen, and the unforgettable club chanteuse Blossom Fontaine, she begins to understand the reason for their dread. The Ku Klux Klan has arrived in Portland in fearful numbers--burning crosses, inciting violence, electing officials, and brutalizing blacks. And only Alice, along with her new "family" of Paragon residents, are willing to search for a missing mulatto child who has mysteriously vanished into the Oregon woods. Why was "Nobody" Alice James forced to escape Harlem? Why do the Paragon's denizens live in fear--and what other sins are they hiding? Where did the orphaned child who went missing from the hotel, Davy Lee, come from in the first place? And, perhaps most important, why does Blossom Fontaine seem to be at the very center of this tangled web? 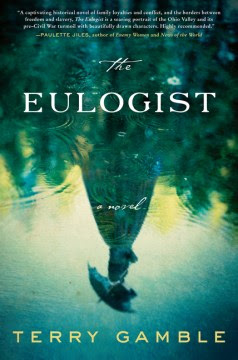 The Eulogist : a novel
by Terry Gamble

Cheated out of their family estate in Northern Ireland after the Napoleonic Wars, the Givens family arrives in America in 1819. But in coming to this new land, they have lost nearly everything. Making their way west they settle in Cincinnati, a burgeoning town on the banks of the mighty Ohio River whose rise, like the Givenses' own, will be fashioned by the colliding forces of Jacksonian populism, religious evangelism, industrial capitalism, and the struggle for emancipation.
Email ThisBlogThis!Share to TwitterShare to FacebookShare to Pinterest
Newer Posts Older Posts Home
Subscribe to: Posts (Atom)